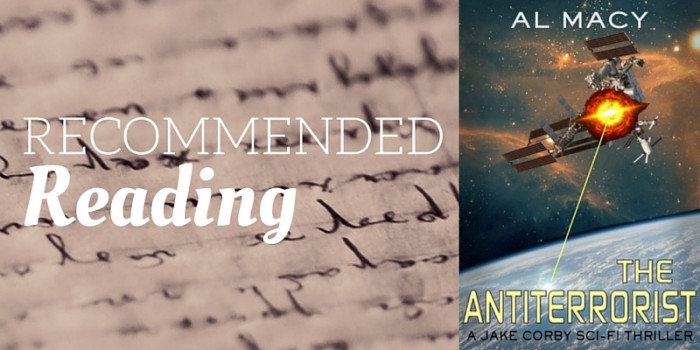 Satellites are disappearing one by one. Not exploding, not dropping out of the sky, just disappearing.

When the Hubble Space Telescope vanishes, Jake Corby is dispatched to figure out who or what is responsible. He’s used to solving problems for the FBI, but hunting down missing satellites? That’s a new one.

The mysterious force next cripples the International Space Station and destroys the only spacecraft that could rescue the astronauts. The race is on to avert the final death blow to the ISS and execute a risky plan to get the astronauts back home. Before it’s too late.

Corby must struggle to track down and thwart the terrorists yet stay true to the promise he made to his wife: “I won’t do anything heroic.” In the heat of the moment, he finds that it’s no easy matter to achieve both goals. Especially when the future of the United States space program is at risk.

This short prequel to Contact Us is filled with the quirky surprises and humor that Al Macy’s readers have come to expect. The Antiterrorist is a standalone book, with no cliffhanger or “to be continued” at the end. It may be read before or after other books in the series.

The Antiterrorist is available here.

Al Macy writes because he has stories to tell. In school, he was the class clown and always the first volunteer for show and tell. His teachers would say “Al has a lot of imagination.” Then they’d roll their eyes.

But he put his storytelling on the back burner until he retired and wrote a blog about his efforts to improve his piano sight-reading. That’s when his love of storytelling burbled up to the surface, along with quirky words like “burble.”

He had even more fun writing his second book, Drive, Ride, Repeat, but was bummed by non-fiction’s need to stick to “the truth” (yucko). From then on it was fiction all the way, with a good dose of his science background burbling to the surface.