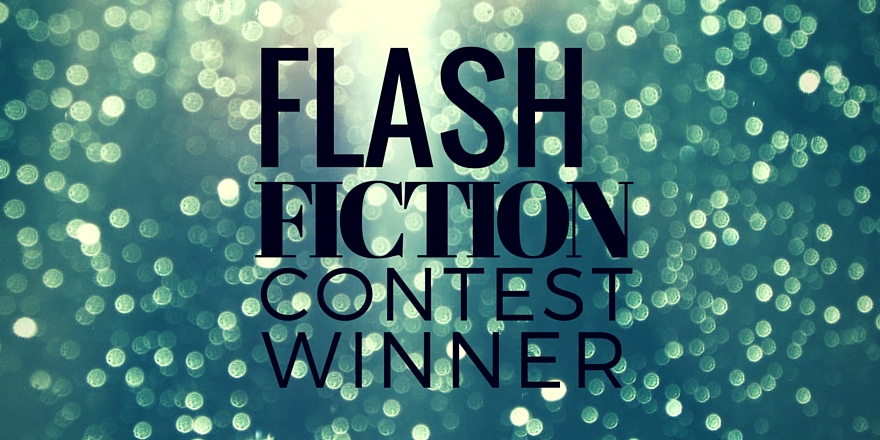 Congratulations to Drew Chial for winning our 10th Flash Fiction Contest! Drew won a $10 Amazon gift card. Thank you to everyone who entered!

You can read Drew’s winning story below!

The beach was a mirror. I watched the sun set into itself. The purple skyline would’ve been a postcard from any other vantage point, but I was buried up to my chin and the colors just seemed ominous. I’d said the wrong thing to the wrong woman. The current was coming to wash my mouth out.

There were red flags from the beginning, clear signs that this was exactly where I’d end up. I didn’t spot them through my heart shaped glasses.

She’d initiated the conversation from the other end of the bar. She glanced in my direction with those bewitching eyes, held high by her cheekbones, and accented with an arched eyebrow. Her smile drew attention to her beauty mark. She looked down into the green concoction she was drinking, pretending the suds were interesting. I had to get close enough to give those eyes a proper inspection.

Of course I noticed the silk gloves that ran down her forearms and the moon shaped rings she wore over them. I was looking for anything to help make conversation. I also noticed wads of tissue sticking out of her heels, as if her toes needed help filling them out, and that up close her eyes had two tones: one blue and one green. I kept those observations to myself.

She said her name was Dahlia “Like the flower not the murder victim.”

She had the type of refined British accent I thought only existed in stage productions. She mused about the drunken patrons, laughed at my bad jokes, and lied about having read the books I referenced. I was smitten.

I asked what she was drinking.

She said, “What passes for absinthe on this bloody continent.”

“Is that why it turns blue in your mouth?”

She sucked her lips in, suddenly aware of her saliva. It wasn’t long before those lips were pressed to mine and that liquorish taste was in my mouth.

We went to her place. Her cats sat at the foot of the bed while we rolled beneath the covers. Her fingertips were ice cold like they were made of metal, her toes seemed square, and I had reason to wonder if her hair was real, but I have a receding hairline and an inverted nipple, so who was I to nit pick?

Things turned for the worse when a complement backfired. I said I was under her spell and she asked, “What do you mean by that?”

“I mean my free will has been circumvented by the magical aura you’ve cast over me.”

I threw my hands up. “I didn’t mean to drop a house on you.”

She glared at me with her emerald eye.

I said, “No need to fly off the handle. Just uh, hold onto your broomstick.”

Now I have a front row seat while the tide comes in, an offering to Mother Hydra or Father Dagon on some other such nonsense.

One thought on “Winner of Flash Fiction Contest #10!”