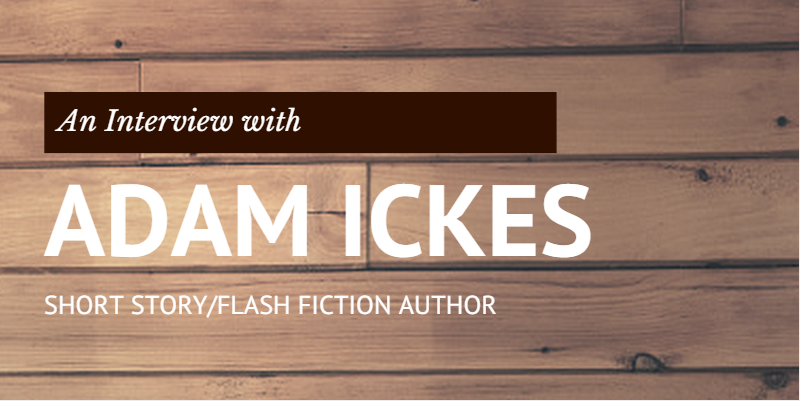 Adam Ickes is a writer who has made a home in central Pennsylvania with his wife and daughter. He is obsessed with releasing the horrors in his mind on an unsuspecting world. His stories live and fester in the twisted confines of his imagination before demanding to be released from their prison, usually at gunpoint.

Adam’s Note: I am a fibber in the sense that I tell stories of things that may or may not exist, not in the sense of being an outright liar.

Below, Adam talks with us about his sources of inspiration and the process of writing flash fiction and short stories!

1) You love writing dark, horror stories. What inspires you to write them?

Like most other people, I was afraid of the dark when I was a kid. My mind concocted all sorts of strange creatures hiding in the shadows, just waiting for a shot at me. Walking through my house in the middle of the night usually turned into a race from one light switch to the next. Despite the fear my imagination caused me, I actually enjoyed the adrenaline rush of running up the basement stairs with the absolute certainty that the gnarled hand of some nameless beast was going to shoot out and grab my ankle. There are very few things in life I’m afraid of anymore, but every now and again when I’m walking up my basement stairs I get that familiar tingle in the back of my neck and I wonder “what if something really is there?”I think that rush best sums up why I write the kind of stories I do. I want to share that feeling with others. It’s both terrifying and exhilarating all at the same time.

2) You have written several  flash fiction stories, 100 word each. How difficult is it to write a complete story in 100 words?

It really varies from story to story. No two work out quite the same. Some flow onto the page in a matter of minutes, while others take days or even weeks to get to a point I’m happy with. Usually the first pass ends up a good bit longer than 100 words, and I have to cut a bunch of the story out, leaving only the bare bones and most important parts to convey the story in such a small amount of space. There’s no room for fat in a 100 word story, but that’s half the fun of it. It really helps hone my sense of which parts of my stories are important and which aren’t.

3) Do you prefer flash fiction stories or short stories and why?

This changes almost daily. It all depends on what kind of mood I’m in. I love both for different reasons.For me, short stories are far more challenging than flash. There are days where I really enjoy challenging myself. Those are the days I dive into short stories or something longer.The days I just want to have fun with my writing without the commitment a longer piece requires or I don’t have a whole lot of time is when I usually stick with flash. I think if I had more actual writing time in my days I’d probably jump back and forth between the two, because I really enjoy both forms of writing, long and short, but with limited time I have to allow my mood to dictate where the time I have will be best spent.

4) The way your stories end  is usually quite surprising. Do you decide what the ending will be from the beginning, or do you change it as you go along?

For longer stories, I usually think about where I want the story to go before I start writing, but I really don’t know why I bother. It almost always ends up going differently than I had originally planned–sometimes very drastically different. Things happen, characters change. I’ve learned to just go with it and accept the fact that no matter how much I try to plan out a story I don’t really know where it’s going until I’m immersed in that world and putting the words on the page. That’s basically why I’ve given up outlining. I tried it–many, many times–but it just doesn’t work for me.The 100 word stories are a beast of a different nature. I almost never go into them knowing much about what I’m going to write. I find a picture, a song, a phrase, or even just a name that sparks something deep inside and I just start typing. Very often I don’t even know how it’s going to end until I get within a sentence or two of the final word. Sometimes I end up with a steaming pile of garbage, but more often than not I end up with a story that at least has potential and just needs a bit of editing to polish it off.

Honestly, it doesn’t matter to me if a story is character-driven or plot-driven. In the end it’s all about whether or not I’m happy with the words on the page, and if my readers are happy with the words on the page, regardless of what drives the story along. I don’t go into any story intentionally trying to do it either way. I never have and I never will. I allow the story to dictate what it wants to be and run with it. I can’t say with absolute certainty that it’s the best way of doing things, but that’s what works for me, and if nothing else I’m a creature of habit.

Thank you for your time, Adam!