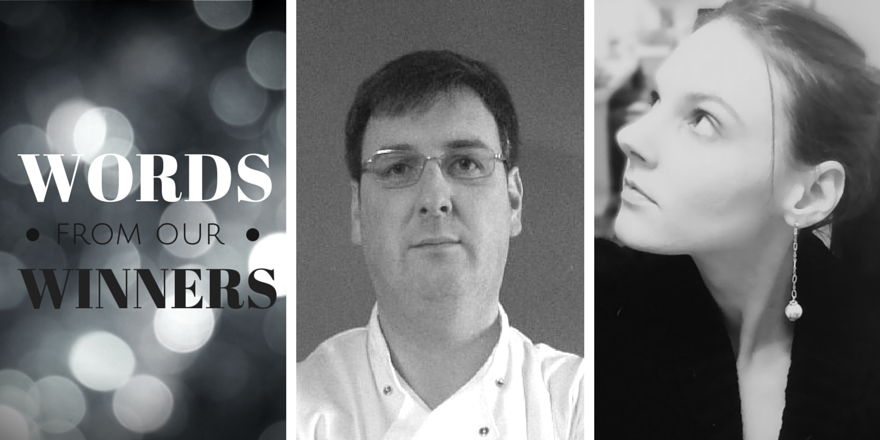 As promised, our winners from last week’s contest get to share a post with you. We asked them to write up a short essay on why they write (or how they started writing). Congrats again, and thank you everyone who entered!

Without further ado, here they are!

Stuart Turnbull – Winning Story: The Hill of her Heart

Why I started writing short stories..

For me there are a couple of reasons for writing short stories.

Firstly it is part of the process of learning to be a good creative writer. I want to write a novel, I don’t know a writer who doesn’t. But when my circumstances allowed me to concentrate more time on writing I very quickly realised that my skills in the area were woefully inadequate.

Writing short stories allows me to make progress in discreet jumps. What I am writing now, is better than what I wrote a year ago (imho). Some people could make this advancement by writing their novel and then going through draft after draft to refine it. I would get bored looking at the same piece of work so much, I would get disheartened when each iteration had its deficiencies pointed out. So, in about 90 years time, expect my first perfect novel.

The second reason I write short stories is for the scope it allows me. I have written about the end of relationships, and energy based alien life forms, and cancer, and earthquakes that destroy California, and the children of Chilean refugees, and alien invasion, and crows that knew Prometheus, and… well you get the idea. So many great, disparate, ideas. So many worlds to write about.

Now, most of these stories are languishing in folders. Some are awaiting re-working, others are just waiting for enough brethren to make a collection worthwhile. A few have been published, and I thank those editors.

As I thank the Short Story and Flash Fiction Society for choosing The Hill Of Her Heart to be one of this weeks winning stories.

When I found out that I won last week’s short story contest, I was surprised.  This was not only the first short story I’ve ever written, but this was also the first time I’d ever posted anything online for anyone, other than who I chose, to read…. to judge… to pick apart.  It was nerve-racking.  But I overcame that initial fear, and it felt good to get such positive feedback and just encourages me more.

So, since this was my first short story, I think I’ll instead talk about why I write.

To be completely honest, it started in high school.  Writing songs and poems to paint to for my art classes that I was excelling in.  I liked metaphor pieces, ya know?  I think from there, it went from small poems and songs to fan fiction about the game World of Warcraft, and then from fan fiction to my own fiction.  I’m still working on a fantasy piece that started out as WoW fan fiction and has ended up as a completely different beast.  Ha, we all probably have those projects.  So, I guess my first and foremost reason for using writing as a creative outlet is because I enjoy it.  I like being able to say what I want to say, as anyone I choose to be, without having to feel the horrible repercussions that may come with doing that sometimes.

Another reason that I like doing it is because I love challenging myself.  Dialogue and character development have always been difficult for me, so it’s fun to push myself on those two levels.  My father, is the third reason.  We’re both story lovers and he’s always been really creative with words.  He actually published his first book this year.  A historical piece, and was given an award by the Historical Society of America for his work.  I love brainstorming with him and talking about our writing together.  It’s the one thing we’ve been able to bond over as father and daughter.  I’m closest with my mother and share everything with her, but it’s nice to have something to share with dad too.

So, I guess this guest post is going to be short and sweet, because those reasons are the reasons that are most important to me.  I wouldn’t be able to do it if I didn’t love it.  And I look forward to learning, growing, and participating more in what the Short Story & Flash Fiction Society has to offer!

One thought on “Words from our Winners”