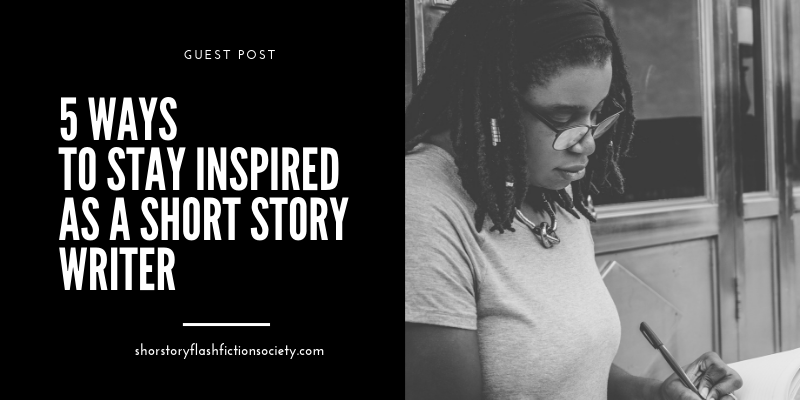 by Emmanuel Nataf at Reedsy.

It’s the worst nightmare for most writers: the dreaded writer’s block. Even worse is the voice at the back of your head constantly asking, “What if today is the day that my well of inspiration runs completely dry?”

We’re here to tell you: never fear. All authors have gone through this hurdle, and all of them have emerged more or less unscathed from it. Here are five of the most popular ways that you yourself can stay inspired, especially as a writer of short stories.

One more time for the people in the back: read, read, read! Re-fueling your imagination through other writers’ works is one of the oldest — and most important — tricks in the book.

What might be even more helpful is the act of active reading: taking note of beautiful prose, passages that are particularly impactful, and how the author went about building it. Use this opportunity to learn from the masters.  Never read Flowers for Algernon? No excuse now. Haven’t gotten around yet to Shirley Jackson’s The Lottery? Now’s your chance. As Stephen King said: “If you don’t have time to read, you don’t have the time, or the tools, to write. Simple as that.”

This includes reading both the good and the bad. Indeed, you might find that a poor piece of writing will inspire you to write in order to create something better. So cast your net wide and don’t be afraid to read outside of your genre.

The more you write, the more you’re giving your imagination a chance to take flight. What you produce doesn’t necessarily need to be a superb show of writing: Maya Angelou, for instance, once said that she might jot down, “The cat sat on the mat, that is that, not a rat,” just to write something.

What matters is that you’re showing the blank piece of paper that it’s not the boss of you. And even if you don’t feel inspired, you never know when the muse will take hold of you again. So your best option is to keep writing until she comes.

If you’re worried that you might run out of things to practice writing, writing prompts are a great way to keep you inspired. This page has more than 250 writing prompts, so go for it. Even a 10-word piece would be a great result. Who knows? You might even get a fully-fledged short story out of it.

3. Don’t forget to walk around and about

When Agatha Christie was running low on inspiration for her short stories and novels, she used to take a stroll and observe her surroundings. By this, we mean not just the scenery that she walked past, but everything: the people on the sidewalks, the people in coffee shops, the conversations that she passed (and eavesdropped on).

You never know what you might overhear or see when you go outside, even on an ordinary day with ordinary people. And you never know if that might just turn into your next great story idea. (Not to mention that researchers have now proved that walking can help jog your creativity!)

This one might seem a bit odd, but it’s a proven technique for inspiration that many writers have expressed in interviews before. So instead of going over what you have, it might be more useful inspiration-wise to imagine what remains in the space of all that you lack.

Ray Bradbury, an expert at writing beautiful, cutting short stories, directly explains the logic behind it: “It’s lack that gives us inspiration. It’s not fullness. Not ever having driven, I can write better about automobiles than the people who drive them. Space travel is another good example. I’m never going to go to Mars but I’ve helped inspire, thank goodness, the people who built the rockets and sent our photographic equipment off to Mars. So it’s always a lack that causes you to write that type of story.”

5. Jot down figurative language when it comes to you

This tip for inspiration comes straight from Marilynne Robinson, who came across some metaphors that she’d previously jotted down while writing her dissertation. The list of metaphors came together for her to give her the seed of an idea for her eventual novel, Housekeeping.

There you have it — five ways to gain writing inspiration when your mind might feel dry as a desert. And whichever method you choose doesn’t matter: what matters is that you emerge from it with a burgeoning short story in hand.

Emmanuel Nataf is the founder and CEO of Reedsy, a marketplace that connects authors and publishers with the world’s best editors, designers and marketers. Emmanuel dedicates most of his time to building Reedsy’s product and is interested in how technology can transform cultural industries.