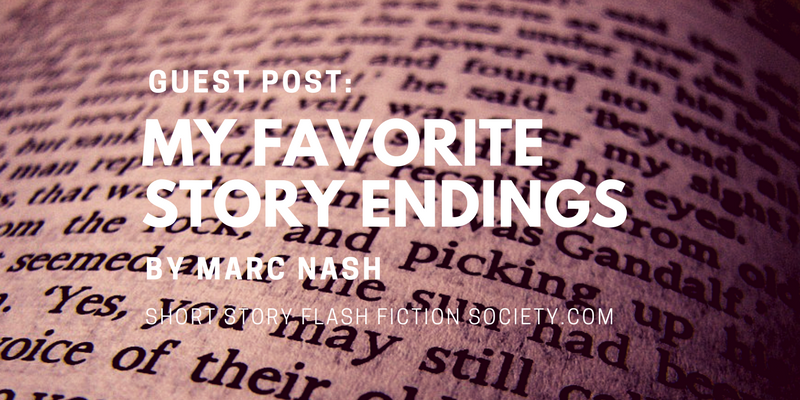 Which story endings do I prefer?

I find this question really hard to answer as I rarely conceive of my stories having a beginning, middle and end. With only 1000 words to play with, you have to plunge right in, no time for scene
setting. So there’s no introduction (to character or setting) as such. Hints to these have to be accumulated as the story progresses. In the light of this, it’s rare I have an ending that veers away
from the style or the tone of the story that has preceded it.

But stories have to end somewhere. I’m not a great fan of the twist ending as too often it seems a reach too far. But I do like a guillotine drop ending, where the story just gets chopped off at the
neck, which can leave a reader shocked or breathless. I also like the vinyl record run out groove type of ending, where the needle gets stuck as the record goes round and round with nowhere else
to go, I sometimes translate that into endings of stories. I also like stories that return you to the very start of the story, perhaps even ending on the same word as the story started on.

I’m in two minds about ambiguous endings, (am I being ambiguous here?). Sometimes ambiguity is a good thing in a story, but for me the whole story has to be ambiguous throughout, not just left open ended and ambiguous after ploughing a pretty defined story arc up to that point. Other times I like to be very precise throughout, particularly about emotions and what lies behind them. Now while it’s true a character may not know all the reasons behind how they feel and that invites ambiguity, I guess I tend to not write those sorts of stories.

I don’t write thrillers, so I’m not one for suspense endings. I don’t write romance, so this isn’t a consideration for me in my work. Happy or sad endings are not really how I approach my writing either; if the story is sad, it stays that way to the very end (such as bereavement stories, I’ve written a lot of those, especially in the last year even though no one in my life has passed over in that time). Equally, if the story is happy or celebratory, then it will end that way as well. There won’t be a twist or pulling the rug from under the reader’s expectations. I would hope that my use of language and the premise of the story will challenge a reader’s expectations, I don’t rely purely on the ending for that.

And finally, one of my favourite stories was called “A Series Of False Endings” and was exactly that. All the cliched endings in movies were offered for the start of the story, which then went on to write about a film director who felt so utterly compromised by the movie executives’ editing decisions, that he finally hits upon the ultimate ending and hangs himself by a spool of celluloid. I guess that was a thematic ending.

This is a guest post by Marc Nash. For more by Marc, you can:

One thought on “My Favorite Story Endings: A Guest Post by Marc Nash”