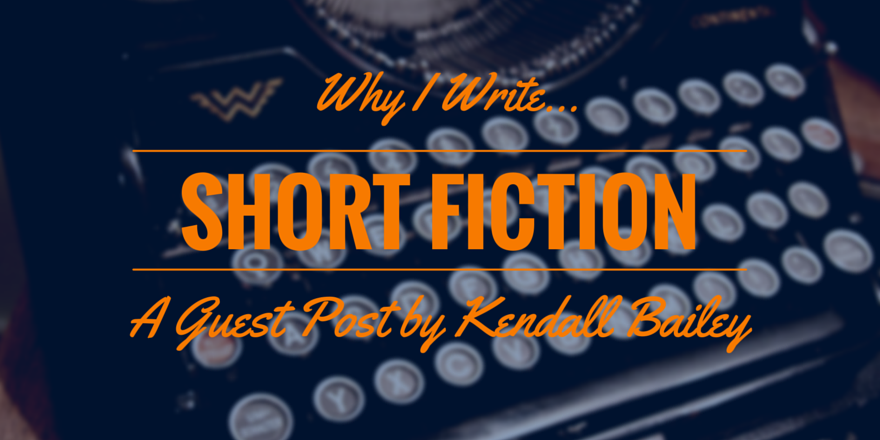 I prefer to read in short bursts, I have since I was in elementary school. It’s one of the reasons why I’m attracted to short fiction. I read novels too, please understand, it just takes me forever to finish one. But with a short story or flash fiction piece I can plow through it in a few minutes to a half hour and feel like I’ve accomplished something.

I write short stories and flash fiction for an entirely different reason. Short fiction is the equivalent of weight lifting for exercising my prose. This is especially true for flash fiction where the word limit is so low, each and every syllable has to count for something. It strengthens my writing like nothing else I’ve tried.

Sometimes I think of it as frosting a cake. With short fiction, you have just enough frosting to cover the dessert, there will be nothing left over. There is a precision and attention to detail needed, if you mess it up, the whole thing is ruined. With longer fiction, say a novel, you’ve got the entire stock of Duncan Hines behind you and you’re able to patch a place here, or move a little over there– it’s easier to come up with a decent end result, though the process may be grueling.

You can indulge your ideas.

I’ve notice the longer I’ve been a writer, the more frequently I come up with odd or quirky ideas to write about. With longer fiction, there’s such an investment of time that goes with it, the idea for the story had better be something many people will want to read. But with short fiction, I can spend a couple days, to a week, getting the story just how I want it and then move on. The idea has been freed and no long thumps away in the back of my brain, it’s refreshing.

Also, it’s just plain fun! I enjoy punching the keys on my laptop and seeing a document building on the page. Even if the subject matter is depressing, frightening, or angry; I always enjoy watching my page fill up.

Anthologies are fun to put together!

Lastly, I want to complete an anthology of short fiction to sell as a book. I already know the title of my first one, it’ll be called Oddities. In the book will be all the weird stories that wouldn’t shut up until they were set free. Among them are: The one about the lady wizard battling a mythical creature in Samoa, the sentient penis that ruins a man’s life, the Halloween one where the dad keeps his deformed son in a shed out back, and probably the one about the former bike who gets revenge on his old gang for his infant son’s death.

I think most writers dabble in short fiction at some point, usually early on. Completing a story in under 500, 1000, 2000, or 5000 words is a prose strengthening experience. Keep writing!

Kendall published his first novel, The Bad, in July 2014. He is currently working on editing his second novel. To keep his brain from trying to eat itself he also writes flash and short fiction. He also runs a blog for indie authors.

One thought on “Why I Write Short Fiction: A Guest Post by Kendall Bailey”