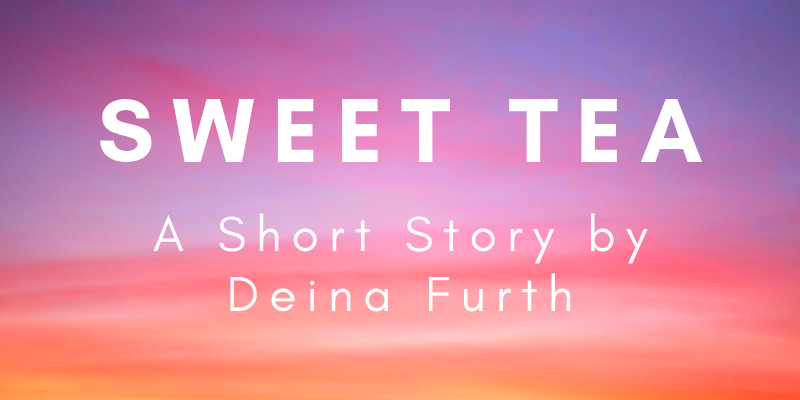 The ice cubes are almost gone, misshapen chunks of fractured glass floating in the diluted amber sea. The sweetness has dulled. The sun has gone with it, leaving me alone on the sagging deck, eyes fixed on the blazing pink and orange horizon. The glass touches my lips again despite the sweet tea’s blunted flavor, and I resign myself to be content with it anyway.

It’s all right. I don’t have the time or the wherewithal to trudge back inside and pour myself another glass, measuring the lemon and the sugar balance just right with the number of ice cubes I’ve personally deemed adequate. It’s an art, the preparation of the sweet tea. And these days, I do it just for myself. Because he’s gone. He left, and now I’m here with the tiniest, most defenseless of humans: the daughter who came into the world 12 weeks early. The one who I spent hours with in the NICU, holding her tiny hand through a case that kept her body from touching mine. I pumped milk and carefully portioned it just as the hospital staff instructed me, so that it was perfect for her tiny tummy. Every day, I brought the fruits of my labor to her so she could ingest it through a tube. I watched them care for her while I longed to hold her. She was too high risk for that, they said. The milk would help her build her immune system, but my own body that made this very sustenance posed a threat to her, too. So, I waited. Pumped and waited and watched and cried. The rest of the milk that she couldn’t take into her stomach was poured into bags to stick in the freezer upon her arrival at home—if she arrived at all, for it was an uncertain hope for those three and a half months. Those were harrowing days.

Thankfully, those days passed. She is inside right now, resting in her bassinet, the bedroom window mere feet from where I sit. The windows are open and the evening breeze floats across her round, rosy cheeks. No worries about the pathogens in the air or my body poisoning her anymore. It was two months to the day yesterday that she came home. She’s five months old, though developmentally, she’s more around two. Preemies are like that. But she’s thriving, waking me every three hours for milk, which she can now get directly from me. I can hold her hand and touch her face, no plastic casing separating us. No tube to her tummy. I am proud of her, of her fight. She’s already fought harder than I ever have and she can’t even control her movements yet.

Another sip of the slowly warming, watered-down tea. I lick the moisture from my lips, tasting the lingering traces of sugar on the tip of my tongue. Inside, she stirs. My hair prickles. Is it already time to abandon my escape? I feel a twinge of guilt for wishing she would just sleep and let me be. But she settles again and my thoughts drift from self-chastising mom guilt and return to him.

It’s been three weeks now since he left me with her, alone at night and exhausted during the day, catering to her stomach’s whims and her mewling when she is uncomfortable or hungry or tired or another state that I can’t quite decipher. They say you get to know your baby. Their cries, their idiosyncrasies. Sometimes I think I know her. Then she goes and changes again, leaving me to figure out her newest communication method. They grow and change so fast. You can’t blame them, and yet, despite their simple needs and your immense love, they are the most frustrating, complicated creatures in the world. But I have told myself how lucky I am despite it all. She’s here, and so am I.

That matters. Doesn’t it?

He’d never wanted a baby. When I found out she was going to come into the world, I was scared. Nervous. Anxious. Angry with myself for not having been more careful. But there was a tiny seed of hope within me; one that I allowed to grow as she did inside me. I let myself get excited. I let myself look forward to what was to come while I counted her kicks and spoke to her through my stomach, not knowing if she could hear me but I’d read somewhere that she could. I bonded. And I blinded myself in desperation, wishing that he would come around and be as happy as I was. I do think he tried. But you can’t make yourself love someone, not even your child. We won’t admit that in our society, but it’s true. You can never force love upon someone. It’s a gift. One I can give freely. He is stunted and has nothing to give to his daughter, nor the mother of his daughter. He thinks he has love to give to someone else, and maybe in time, he will. But not now. He’s made a horrible mistake. He will realize it someday, and it will be too late. We don’t want him dragging us down.

I gulp down the last of the tea and watch the sun dip below the horizon. The colors have dulled a little; purple smears the heavens now, and the first stars peer at the world from beyond the veil. I am as close to peace as I can be, with the Arkansas dirt almost the color of my tea, the air carrying the scents of late summer, the sounds of crickets and cicadas buzzing and droning incessantly. It is comforting to me. Although it carries the memories of the nights spent on the porch with him, waiting for my daughter to arrive; the nights before that when we might have been something close to happy; it also carries the memories of my childhood: The summers spent in the heat, lazily lounging in the sun until the humidity overtook us. The forts built near the river. The pictures we drew in the clay. The fountain in town where we tried to swim more than once and got in trouble for it as many times. And the winters, sometimes there’s snow and sometimes not. When there is snow, it can be a real treat, and Christmas really feels like Christmas. Like the ones you see in the movies.

These are the memories I want to share with her. I want her to make her own memories here, of summers and days of playing with friends and getting kicked out of the town fountain for being troublemakers. The Christmases with or without snow, and the times we enjoy a cold rainy day just being inside, enjoying each other’s company.

And of course, she’ll have the memories of sweet tea shared together. I’ll make it for her, and she can decide just how she likes it so that its taste is tied to all that is good in her life.

I take in a deep breath and know that this evening will remain in my memory forever. My confidence is returning. I can do this.

I can do this without him.

Just my daughter and I. I will give her the world.