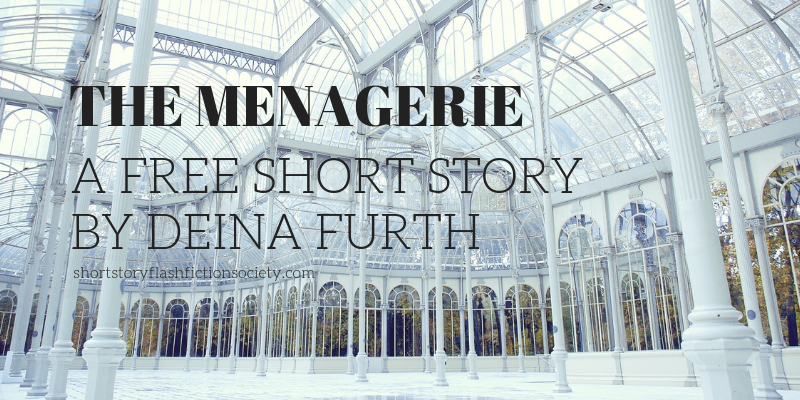 The halls were quiet. Helena’s footsteps echoed against the delicate arches and columns: a building made almost entirely of glass and mirrors, ancient and strange, with the mythic menagerie awaiting her behind the only wooden doors in the entire place. She’d heard stories of the menagerie. Oracles more than animals, they were not meant to be observed but heard. The palace, with its bizarrely shaped rooms and corridors, was a work of art unto itself, with hallways appearing to go on forever and ceilings reflecting so many iterations of the travelers upon the floor that you never quite felt like you were actually alone. You were alone, though. Only one could be in the sacred place at one time. The menagerie only evaluated one person.

Helena approached the door and placed her hand on the golden imprint. It looked sort of like a compass, but the directions didn’t make any sense; they weren’t directions of Earth. It was like a snowflake exploded, with angles intersecting other angles in ways that didn’t make sense. Helena tried to clear her mind. Perhaps it was best not to question it all and just focus on her presentation. You weren’t supposed to understand the timeless wisdom of oracles. You were merely supposed to listen.

The door opened. Inside was beautiful: White columns, a glass ceiling showing the changing fall leaves outside. Reds, oranges, purples, and yellows spilled through the windows, painting gorgeous patterns on the white marble floors. The oracles waited at the opposite end of the room.

The giraffe stood still, its head almost grazing the ceiling. It towered above the zebra, which was sitting almost like a cat in the giraffe’s shadow. The lion sat behind the zebra. They all looked in Helena’s direction.

Or it seemed like they were. As Helena approached, she saw that the shadows were not playing tricks on her: they had no eyes.

“Stop there,” the giraffe said, curving its neck down, stretching and stretching, to get a good look at her. She complied. In a few moments, its face was mere inches from hers, its long eyelashes framing sockets that were so dark she couldn’t see anything inside.

The lion pushed itself up on its giant paws and stretched. It grumbled and began circling her, sniffing. “And you want to know your destiny? The sequence cast in the stars?”

Helena felt as if she were made of stone. Every muscle was tense, and her jaw felt like it had been wired shut. She nodded. “—Yes,” she finally squeaked.

The zebra got up last, its hooves clicking on the marble floor with authority. It rubbed against her as it circled opposite the lion. She kept her feet firmly planted.

“It isn’t special, sweet girl,” the zebra said, cloyingly. “Your destiny is common.”

Helena cast her eyes downward. “I know,” she replied softly. “I am not here to stroke my ego. I—I just need to know what the stars say.”

“Why would you want to know what the stars say if they aren’t writing anything unique for you?” the lion asked, grumbling again. “Most who come here ask because they feel destined for greatness. You feel as if you’re destined for an average life.”

“You’re right,” Helena said, looking up again. “But that’s all I need. I—my family, they’re cursed. Average would be welcomed.”

“Yes,” the giraffe said, moving its neck away, looking to the canopy of leaves at the glass above. “I see this. Three centuries of a curse, no less. For humans, an eternity.”

Helena didn’t say anything this time. It had been an eternity. Young children growing up to fall apart, madness rending ripe minds before they had the chance to see their own children grow up. The weeping and screaming, the echoes of those who had gone before them growing ever louder, accumulating, until one day they simply expired, and it just moved onto someone else. No explanation, no cure. No one trusted them, no one loved them, and yet there were still moments of tenderness—weakness, maybe in which children could be conceived.

“A strange malady indeed,” the zebra said, almost in a pitying way. Helena bristled. “The simple answer would have been to simply stop reproducing and end the cycle of torture.”

Helena’s heart quickened. “I had no control over the choices of my ancestors,” she snapped. The lion stopped circling at this, its empty gaze falling on her face.

“Yes, I am. Why do you think I’m here? I need to know if I’m going to die before my baby is even grown!” Tears stung her eyes at the thought. Her temples throbbed. Was this already a sign of the madness beginning? Did it start this way, with anger and desperation and denial?

“You’re supposed to come alone,” the lion said. “Those are the rules.”

“Not if you have another inside you.”

Helena and the lion stood face-to-face in silence. His tail twitched. Her fists curled into balls. Then the zebra spoke up.

“A young mother wants answers for her babe. It is fine. She’s quite alone.”

“Hmph.” The lion went back to pacing. There was a long silence, then the giraffe looked down again, its face soft and reassuring. Helena let out a breath she didn’t know she’d been holding.

“The stars spell out a long life, but one of loneliness. You won’t die before your child grows up, but you will outlive everyone you love.”

Helena’s voice caught in her throat. She wouldn’t go mad, like all the others, but she would be destined to watch everyone else die off slowly? Lose their minds to the curse?

“Will the baby still have the curse? Or does this mean that I am the last to have it, if I live for so long?”

The giraffe pondered this a moment, then replied, “It can end with you. The stars have written that for you. You can bring it all to a stop. But you will still see other disease, other suffering, in those you love, and you will still bury your child nonetheless.”

Helena’s heart skipped a few beats, fluttering uselessly in her chest. How was this any better than a curse of madness?

All three of the oracles looked at one another, then at her. The giraffe nodded.

“When it’s time for my baby to go, however and whenever it is, may it not be painful for him or her. Please, after so many generations. If my child dies, please spare them the pain of madness or physical disease.”

The oracles moved closer, touching their heads together. She could feel the energy in the room—it was like they were telepathically communicating in a way humans would never comprehend. After a few moments, they looked back at her.

“We pity you,” the zebra said, finally. “We’ll grant you this favor.”

Helena smiled, the weight of three hundred years tumbling from her body and mind. She bowed her head. “Thank you,” she said. “You have no idea what this means to me.”

The menagerie bowed back.

“It’s rare someone asks for something so humble,” the lion said. “Most want fame or glory. Yours is an honest request, one the stars can grant.”

Helena quickly wiped a tear from her eye. Maybe she could push her luck a little farther. She laughed.

They laughed with her, and then the giraffe leaned forward once more.

“Your tongue will be the death of you.”

And with that, the palace seemed to implode on itself, folding over and over, with Helena inside it, until she was wrung from its walls and deposited in the wheat field near her village. Her breath took a moment to find her again, and then she placed her hand on her stomach. The baby kicked her.

“My tongue?” She rubbed her belly. At least he or she would be safe from the pain of madness and suffering of disease. Her tongue was hers, under her control, and not gone to the curse. “At least words are my own choice.”

She struggled to her feet and then began to make the trip back to her home, the baby dancing inside her as she walked. Someday they would walk the stars together, in peace. Their own souls, their own minds, bound together in safety forever.

An average life, perhaps, but a small price to pay for an eternity of freedom.

You can find more works by Deina Furth on Amazon.

One thought on “The Menagerie: A Free Short Story by Deina Furth”