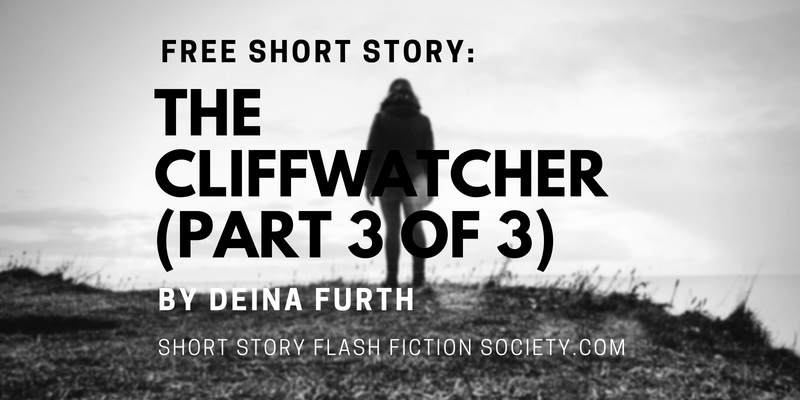 It had to be the television. It had really hyped this up, this suicidal glorification, hadn’t it? And now it was affecting impressionable teenagers’ minds. The old man shook his head.

“It was two very unfortunate—”

“Oh, it wasn’t two,” the girl interrupted, shaking her head. She attempted to pick up the tea, but her shaking fingers merely tapped at the cup, and she gave up trying to steady her hands. The woman’s draped body disappeared into an ambulance, sirens blaring, as she was whisked away–but there was no sense in whisking her away in an ambulance, was there? She was gone. And he hadn’t been able to see the beast. He hadn’t been able to hear it. He only heard and saw it through her; a muffled distortion of what it was and what it was capable of.

“This has been going on for ages,” she continued, her words more of a snarl than a sentence. The buzz of a dispatcher’s voice came from his phone. The old man tried to deafen it with his palm, praying she wouldn’t hear it.

“The voice,” She reached a hand to the side of her head and tapped on her skull with her finger. “It won’t stop. We all hear it.”

“What does the voice say?” he asked, not really wanting to know the answer, but too fearful of silence to cease the conversation.

The girl took several shallow, fast breaths before responding, as if trying to separate herself from it.

The old man’s friendly smile drooped into a frown. His heart was breaking, as it did before.

“You know those words aren’t true,” he replied softly. “You’re not nothing.”

“You’re nothing, you weren’t meant to be here, it would be so easy to just end it, no one would miss you…” she continued. Suddenly, she pushed the chair back and stood up, clenching her fists tightly. “The closer we get to this place, the louder it gets! It comes from the sea!” she yelled. The old man jumped at the volume of her voice.

“I mean that this cliff—this is where it tells us to go! It’s so loud—it’s—it’s—deafening now, and we can’t…stop… it…” she sobbed, looking out the window to the cliff side. She folded her hands in front of her chest, her fingers gripping one another tightly. “It has to stop…”

“And you think that listening to it is the answer?”

“You don’t get it, do you, old man?” the girl yelled, slamming her hands down on the table. “This voice tells me this all day. Every day. It isn’t just me—you saw the two women die, and they heard it, too. Day in, and day out. Do you think that they always felt as worthless as they did at the moment they jumped?”

“—And it started with me, too. And it tells me to come here. So I get here, hoping—hoping that it would stop so I could go back home—I have a family, a boyfriend, a baby brother, you know, so it’s not like I have nothing waiting for me—and, and it’s just overwhelming… It is screaming at me!” She pushed her hands through her hair, grabbing fistfuls of wet locks. She shook her head back and forth violently as if she were trying to force the voice from her skull. Her eyes still looked dead despite her rage, like she was a puppet being manipulated by an unseen hand.

The old man hoped that help was on the way. He didn’t know what else to say to her, and he felt her despair was beyond his reach.

“But why just women?”

“It never says why. I can’t explain how it seeps into your mind, like a fungus that keeps spreading until it suffocates you. Something in the sea calls to us. To the ones it wants to claim.”

There was a silence between them. The old man pursed his lips.

“I don’t know what that means, sir, and I don’t really care. It doesn’t make sense—none of this makes sense—but I can’t take it anymore. If I have to go jump into the sea to satisfy some siren call, I will.”

“Is—is it saying anything now?”

“Can you talk to the voice?”

“Yes, but it won’t listen. Nothing will shut it up. Nothing will change its mind. The only way to stop it is to kill yourself. Give it what it wants.”

The old man shuddered for a moment, wondering if that’s what she felt, too, as her car plummeted from the cliffside. Was she searching for silence? Was it depression, or a literal beast? The operator’s voice had quieted. He tried to calm his trembling fingers against the warm porcelain surface of his teacup.

“Do you understand now why I’m here?” the girl asked, clenching her hands into fists again.

The old man did understand. He did understand the nature of depression, the way it mixed up your thoughts into one jumbled mess that couldn’t be sorted out no matter how hard you tried; the way it bled your body dry of any motivation, not even for the simplest of things like brushing your teeth or combing your hair. Like his wife, when she stopped eating, when she stared at the sea, when she sighed at the silence.

“All I can say, my dear, is that it will get better,” he said, looking up from his tea. There were tears in his eyes now. His lower lip trembled.

The sound of sirens interrupted their talk. The girl’s eyes widened.

“Please miss, I only want you to see—“

“I don’t have time for this!” she screamed, leaping to her feet. “I can’t listen to it anymore! They’ll drag me off to an asylum and I’ll have to listen to it for the rest of my life! And when the others come here, don’t you try to stop them, either, old man. You have no idea what it does to you! You’re not saving anyone; you’re killing them!”

The old man grasped at the girl, but she barreled through the back door. As the front door slammed shut, several medics ran in.

“There!” the old man said, his voice cracking. He pointed a shaky finger at the girl running across the lawn. “She’s going to jump! Please—you have to stop her!”

The medics took off running, tumbling through the door and spilling onto the lawn after her. The girl shrieked, yelling for them to stay away from her and to just let her die already.

In her fury, the girl slipped on the grass, falling face down onto the hard ground. It took her a moment to raise herself to her hands and knees. The medics closed in around her and each took one of her arms in his. She let out an unearthly wail, throwing her head back and letting her body go limp. Blood smeared across her face, a cut on her lip oozing the liquid down her neck and chest.

The old man watched as they cradled her, wiping away the blood and guiding her across the lawn toward the vehicle parked out front. She sobbed, shaking her head over and over again, dragging her feet across the grass, clenching and unclenching her fists in despair. As they moved past the window, she wrenched her head around to meet the man’s gaze. The look she wore was one of pure hatred, and it chilled him. But things would get better for her. She would go on to recover, she had a life in front of her…

The old man stood up and moved to the mantle on the opposite end of the room. He trailed his hand over the wooden ledge until he came to a framed photo of a happy couple, fifty years ago, dressed in their finest for their wedding day.

The cops had come to the door, wearing looks of concern on their faces. Right away, he’d known something had happened to her. She hadn’t been herself. They told him she’d had an accident, that she’d lost control of the car she was driving. It had been raining, and the roads were slick. The curve by the cliff’s edge was sharp, and there was nothing that could have been done.

They told him they were sorry and asked if there was anything they could do. He just felt numb. The numbness had never completely left; it was just a dead space where her warmth used to be.

His own wife was taken by that voice. But surely, it couldn’t be anything other than the beast depression in her own head. It couldn’t be something that told all the women here that they needed to return to the ocean… that didn’t make any sense.

He placed the picture back on the mantle and shuffled back to the kitchen table, where he took his seat once again. He sipped the tea, watching his reflection in the darkened window mimic him. My, it had gotten dark fast.

There would be no more. He would watch the cliff. He would catch them before they fell.

He would not let the voice drive them to madness. He clasped a fist to his chest and began to pray. The sea seemed to groan in response, waves lashing harder at the shore. He prayed harder, and the sea responded by tearing a sheet of loose rocks from the edge of the cliff and swallowing them, morsels in a hungry maw.

They would be okay.

Subscribe for updates using the link at the top of the page or on the menu on the sidebar! If you’re interested in reading more by Deina Furth, please visit her Amazon page here or her website here.

One thought on “THE CLIFFWATCHER: A Short Story by Deina Furth (Part 3 of 3)”